Most of them were reported with underlying health conditions, including hypertension, diabetes, hyperlipidemia, kidney disease, cancer, heart disease, strokes, lung disease, obesity, liver disease, and alcoholism. Two of the fatalities did not reportedly have any health conditions.

Of the new cases, 1,467 were found in hospitals and medical services, 703 were from a proactive approach at previously reported clusters, 102 were from prisons, and the remaining 38  were imported cases.

Regarding the non-prison local infections, the highest numbers of patients were reported in Bangkok with 788, followed by Pathum Thani with 308, Samut Prakan with 209, Nonthaburi with 132, Prachuap Khiri Khan with 94, and Samut Sakhon with 89. Chonburi reported 81 new and confirmed domestic infections this morning. 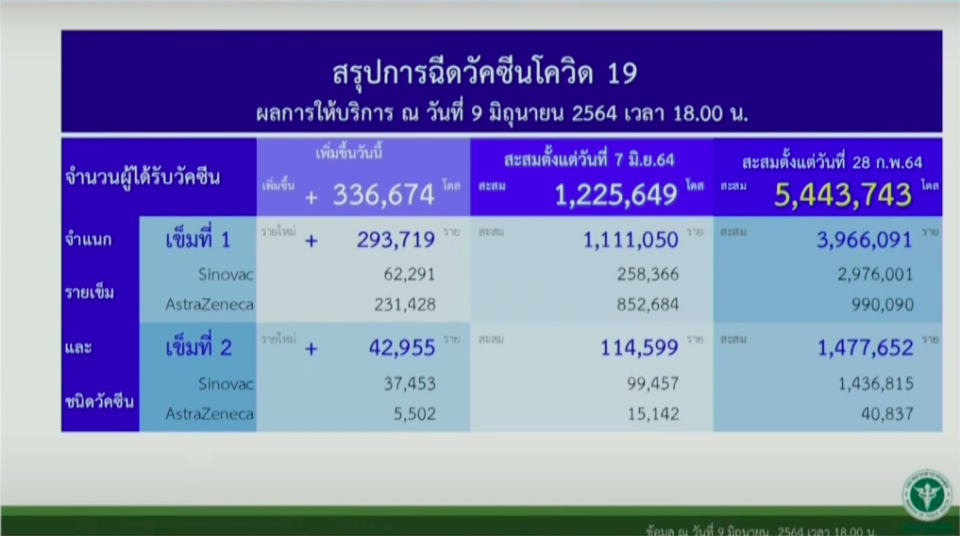 37,453 people had their second shots with a Sinovac vaccine and the second dose was given to 5,502 people with AstraZeneca, marking a total of 42,955 people.

As of today, 3,035 people fully recovered in the past 24 hours and have been released from field hospitals and quarantine centers. Thailand has now reached a total of 187,538 cases with 139,287 recoveries and a total of 1,375 deaths since the start of the pandemic.

This morning, the Chinese Embassy Bangkok announced online that an additional one million doses of Sinovac Covid-19 vaccines have arrived in Thailand for emergency distribution. The Chinese government has donated 10 lots of Sinovac vaccines to Thailand, marking a total of 7.5 million doses, so far.